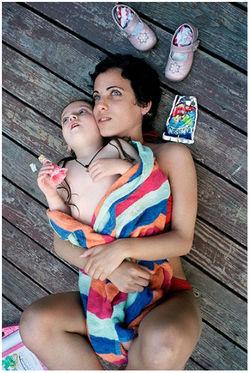 Gitty and her daughter at a friend’s house in Monsey. “Mummy loves you as high as the sky” Gitty says.

Gitty is a 23-year-old woman who grew up in the ultra-orthodox world of the Satmar Jewish community in Kiryas Joel, north of New York City. Being that her grandparents are New York liberal Jews who have never been part of the Satmar community, Gitty grew up rather ambivalent about her religious path. At 17, she was married through a matchmaker to a young man from the Satmar community, and shortly afterwards gave birth to Esther Miriam. Soon Gitty’s desire for freedom became apparent. Eventually, this led her to leave the community and her husband, taking her daughter with her. But the Satmars, who do not approve of Gitty’s secular lifestyle, took Esther Miriam back, to be raised in their way. Today Gitty is fighting for custody of her daughter. She struggles with with Hasidic requirements to visit Esther Miriam. Her trips back to Kyrias Joel are often tense and painful.