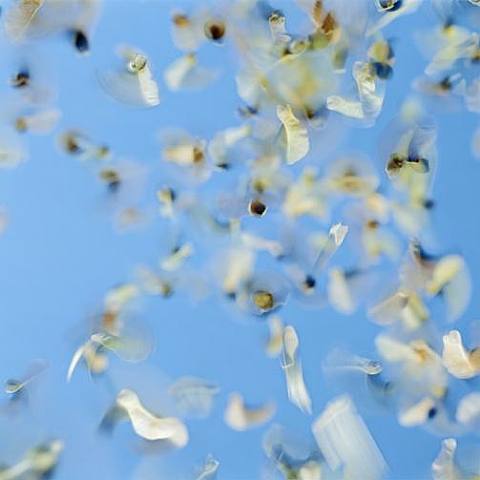 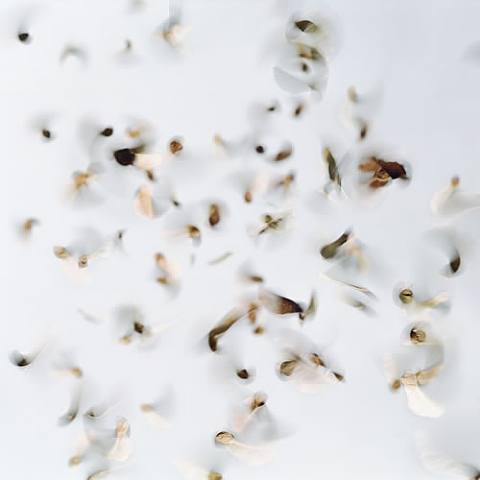 For this body of work Neeta Madahar shot a couple of hundred roles of film…she ended up with five final images.  She calls this ‘brutal editing’.  It works.  A painful necessity.

Madahar is very considered.  This comes across in the way she talks about her work.  She thinks about everything.  I like this.

“For some time I have been thinking about the exploration of personal childhood memories and how the temporal experience of a moment of reverie is compressed or expanded through recollection. Like many as a child, I would collect sycamore or ‘helicopter’ seeds, throw them up in the air and watch with fascination and pleasure at them spiralling down to the ground. I remember finding the seeds still attached by stalks to tree branches, most often already lying on the ground or if I was lucky, at the right moment I might chance upon a seed twirling naturally down in front of me. Unfortunately, I never observed looking directly upwards to see sycamore seeds spinning down towards me, hoping to feel them brush past my face. I wanted therefore, to construct this experience as a new opportunity for reverie, of being able to enter a fluid, imaginary space where an event unfolds over time and through space specifically for a viewer. The intrinsic ability of photography to allow one to stare at a slice of time and that a photograph can holds one’s attention to widely differing degrees has great appeal for me. Originally I wanted to create several photographs of seeds at different heights in the air against a range of skies. On further reflection I decided that I also needed to create a piece where the experience of time is controlled by the medium itself, such as film or video, that would then create a dialogue with the temporal experience of the photographs. The body of work, Falling, therefore comprises a video animation of the same title and five photographs.

The title Fallingwhilst being a literal description of what is happening in the works, is also open to other interpretations. For example, the word is an active term that implies a transition from one state to another. It is a liminal condition full of potential. ‘Falling’ also alludes to a loss of control. Whilst this release into a dreamy, fantasy state can be pleasurable in the moment it can simultaneously induce anxiety about the eventual finality of the experience”.