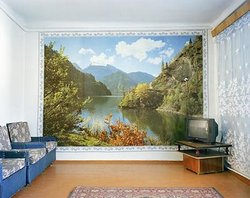 Today Simon Roberts spoke at University College Falmouth Photography Symposium 2009.  It was really good.  He talked about his work from the early days as a press/editorial photographer; The Children of the Apocalypse was an article shown in the Independent (Nov 2000) about the Aids epidemic in Africa.  How do you approach such a subject and not simply churn out the cliche images?

More recently he has undertaken more personal documentary projects like that of Motherland (www.motherlandbook.com).  ”This was a journey of discovery, a chance to explore every region of Russia and all its seasons. Spending a year there allowed for a sustained engagement with its landscapes and people. Unconstrained by either the time frame or the specific agenda of a photojournalistic assignment, I was able to respond spontaneously.  Motherland is meant as a visual statement about contemporary Russia, fifteen years after the fall of the Soviet Union. I wanted to counter some of the photographic representations of Russia that focus on collapse and deterioration – with their emphasis on the consequences of Russia’s turbulent past as opposed to the possibilities of its future – without sidestepping the realities of Russian daily life.” 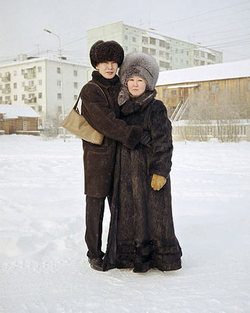 I am interested to see what his new body of work ‘We English’ will turn out like…the few sneak previews displayed his slightly more distanced approach.

After that, a body of work about Bethlehem is in the planning.

This image from Simon Roberts Motherland series is of a couple he met in Moscow I believe.  She is pregnant, and they are traveling up to where she was born so he can ask her Father for her hand in marriage.  He is carrying her hand bag.  It matches her gloves.