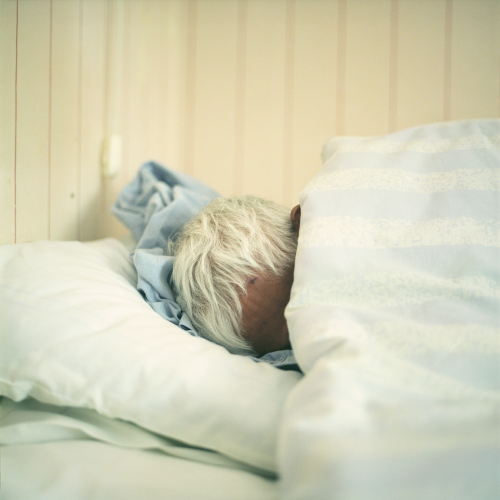 “Snötäckt: under a blanket of snow is a photography project about my father and his current life situation. Originally from Sri Lanka, he came to Sweden thirty years ago, and has lived there ever since. Recently, certain events occurred that made it impossible for him to stay at his home, and he was obliged to move to northern Sweden. He is now in his late sixties and seriously ill. This limits his ability to travel and therefore, he may never return to his native country. With his illness came the terrible reality that he might soon pass away, and I realised, as so often happens in these kinds of situations, that there were so many things I wanted to ask him, so many things I wanted to know about his life. I turned to my camera to try to make sense of my own emotions and to understand him, and moreover, his relationship with the environment he lives in.”

There are some very sensitive and quietly beautiful images in this series, however I think Mangalanayagam is trying to call to attention too many different topics.  For example her personal emotions concerned with her father, as well as his experience of living away from his homeland, underlined by ideas of ‘race, identity and displacement’ as a global issue that she has discussed.  On top of that the self portraits she has included add another arguably unnecessary dimension to the work.