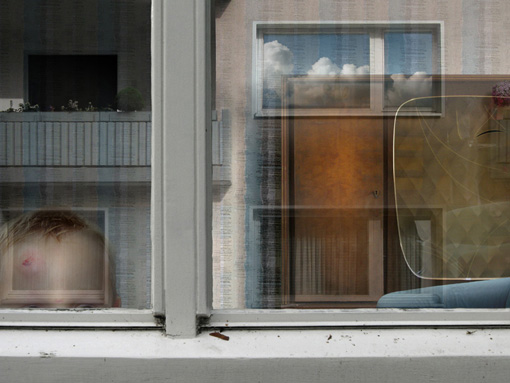 “The painter Wim Bosch has been using the computer to compose his works since 2000. In his recent prints, interiors are mixed with fragments of the exterior reflected on the surface of the window. It is striking that, with the introduction of modern media in his personal work, the artist has become increasingly exuberant in his visual idiom. Whereas his early paintings seemed like a highly studied ‘undressing’ of the spaces – no less enigmatic, all the same – in his current work Bosch flamboyantly ‘dresses up’ the spaces. Layer by layer he builds up his glimpses into interiors and his vistas through and across them using found material as well as photographs he has shot himself: he develops a decorative pattern into a wallpaper, he magnifies and transforms a fragment of net curtain into a curtain bordering on heavy and opaque, and cupboards, doors, lamps, plants and light switches find a position within this setting.

This rich visual idiom makes a fairly compelling appeal to our need for interpretation, for attributing meaning. Elements such as buds, stuffed birds or a voluptuous head of hair bear the promise of a clear-cut meaning. At first sight they seem like over-familiar symbols, but in the context where Bosch situates them they function only in part. In our attempts to get a handle on the spatial constructs, on the scenes that take place in the interiors and on the possible meaning of the visual elements employed we repeatedly get stuck halfway and are left with a niggling sense of uncertainty.

The cultural scientist Barend van Heusden has called works of art ‘half-signs’: rather than give meaning they confront us with what still has to be interpreted. A good work of art creates a semiotic problem by telescoping and mixing signs. This means that art is, in a certain sense, an imitation of our persistent attempts to gain a hold on the visible reality surrounding us. When we look at the world it complies with what we expect of it, with what we know, only partially. The world presents itself as a multiplication of meanings involved in mutual struggle, and that compels us to interpret it. While in our day-to-day reality it is important to resolve this doubt, the work of art actually exploits interpretive freedom.

In the reflective surface of Wim Bosch’s windows, the person looking in – whether the artist or the viewer – remains unseen. It is as if they are not truly absorbed into the image, do not really gain access to what is to be seen there. That is a telling description of the experience that Bosch considers to be the driving force behind his work: even though the world presents itself to us as something that is visually clear-cut, on closer inspection it proves to be pretty inscrutable.”

Margo Slomp (art historian), works as an author, editor and advisor. She also teaches Art Theory for the Master of Fine Arts in Painting programme at the Frank Mohr Institute in Groningen, the Netherlands.